Seating Information: Seating in Westbrook Auditorium is general except for

Man of La Mancha is a classic among classics, so who better to bring it to the Bloomington-Normal stage than Prairie Fire Theatre? Inspired by Miguel de Cervantes’ 17th century masterpiece Don Quixote, “La Mancha” will inspire, delight, and break your heart all at the same time. The story: While awaiting trial during the Spanish Inquisition, Cervantes and his fellow prisoners perform a play-within-a-play, telling the story of the elderly Alonso Quijana/Don Quixote who goes on a quest to right all wrongs in the world. The rousing score, which demands strong voices, includes “The Impossible Dream,” “I, Don Quixote,” and “Dulcinea.” 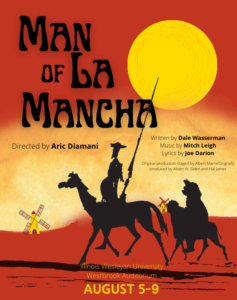 NEWS & EVENTS
ANY QUESTIONS? GET IN TOUCH!
Please fill out the form below and we will be in touch shortly.
Go to Top